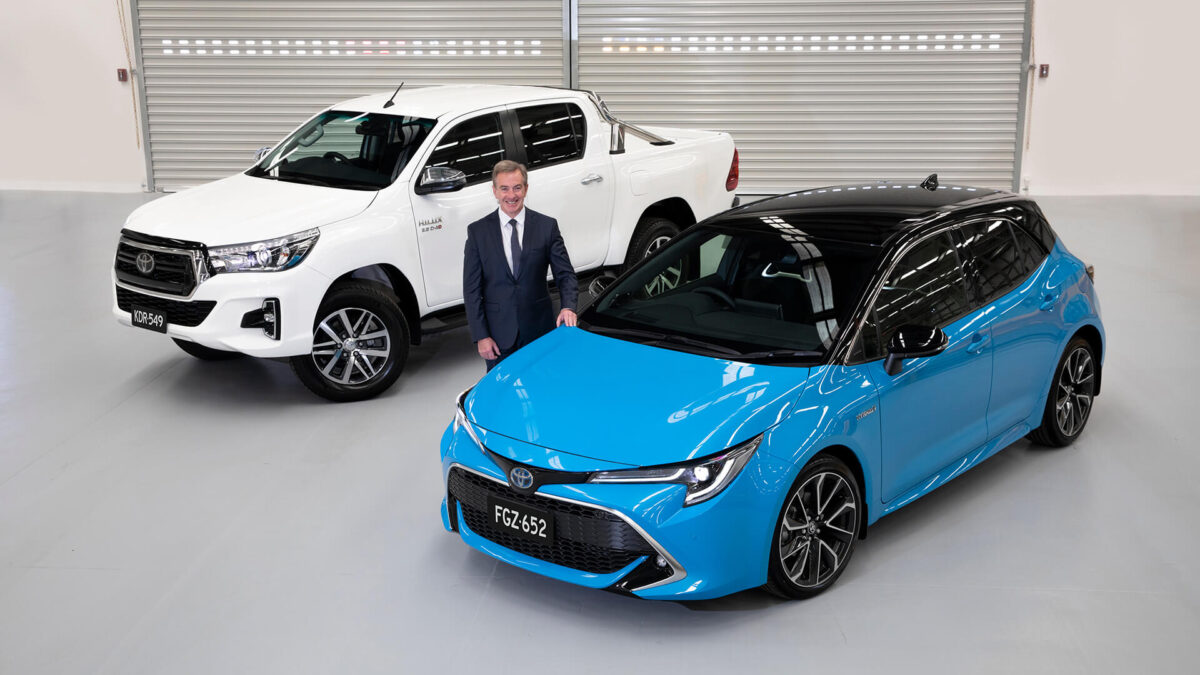 Toyota predicts it will sell more than 200,000 vehicles in 2020, with sales of the company’s hybrid cars and SUVs expected to approach a record 20 per cent of all deliveries.

The forecasts follow today’s announcement that Toyota is the best-selling car brand for 2019, leading the new-vehicle market for the 23rd time – the past 17 years in a row.

Customers bought 205,766 Toyota vehicles during the year, lifting the company’s market share to a seven-year high of 19.4 per cent – more than the combined totals of its two nearest rivals for the third straight year.

It is the eighth year in a row and the 15th time in the past 16 years that Toyota sales have exceeded 200,000 vehicles in a calendar year.

Toyota’s HiLux (47,649 deliveries) is Australia’s best-selling car for the fourth year in a row – and Australia’s most popular commercial vehicle for the past 22 years.

HiLux has also extended its position as the top-selling vehicle in Western Australia to 12 years, Queensland to 13 years and the Northern Territory to 19 years.

Corolla (30,468 sales) has maintained its leadership in passenger-car sales for a 7th consecutive year, while demand for Camry (16,768) rose by 9.8 per cent to extend its reign in the mid-size car segment to an unbeaten run of 26 years.

Toyota’s tally in 2019 was boosted by a record 27,846 hybrid vehicle sales – more than 13.5 per cent of the brand’s total sales and more than double the previous year’s level.

The company expects surging demand to accelerate hybrid sales this year to a new record of 40,000 deliveries, with the final number determined by supply.

Toyota Australia President Matthew Callachor said 200,000-plus sales with a rising share in a tough market highlighted the confidence and trust consumers place in the Toyota brand and its range of vehicles.

“Our market share was 20 per cent or higher in six months of the year and was 18 per cent or above on a further four occasions, providing a level of consistency that generates confidence in consumers as well as amongst our dealers,” Mr Callachor said.

“This year, we will further strengthen the appeal of our brand and our line-up with the arrival of Yaris and full-year availability of the new-generation Corolla sedan and the upgraded C-HR. All these models offer hybrid powertrains for the first time.

“Along with our existing RAV4, Camry and Corolla hatch hybrids, it is clear our target for hybrid sales in 2020, representing around 20 per cent of our total volume, is well within reach.

RAV4 – with a new-generation vehicle that arrived in May – was Toyota’s most popular SUV with an all-time high of 24,260 sales, a gain of 9.5 per cent over the previous record set a year earlier. Corolla, Camry, LandCruiser Prado, LandCruiser wagon, HiLux 4×2, Coaster, HiAce van and HiAce bus led their individual segments.

In the past decade, Toyota has sold in excess of two million vehicles – delivering one million more vehicles than any other company.