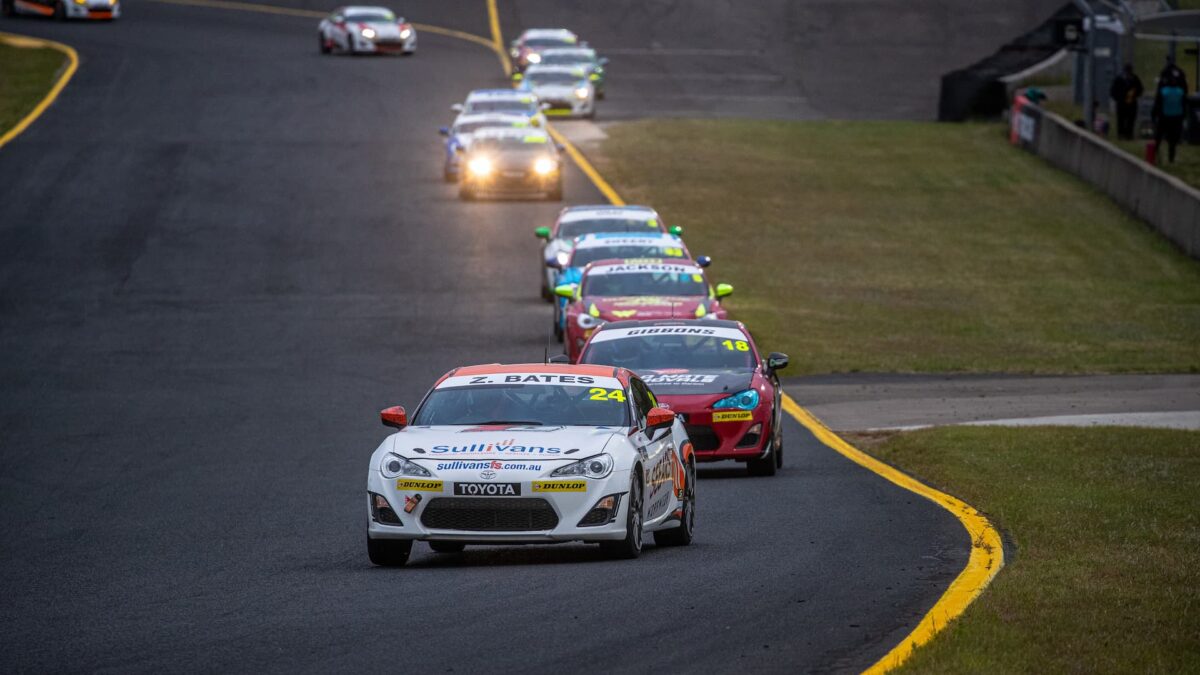 Toyota 86 race cars will once again take on the iconic Mount Panorama circuit at Bathurst next weekend as the TGRA 86 Series lines up for its final grid of 2021.

After a season disrupted by COVID-19, drivers and teams from across the country will take to the mountain in a final weekend of thrilling wheel-to-wheel action as part of The Great Race Festival that runs from 30 November to 5 December.

While there have been four TGRA 86 Series rounds run as a support category for the Supercars Championship over the course of 2021, many drivers were unable to compete due to border closures and COVID-19 restrictions.

So as a series that prides itself on creating a level playing field, Toyota has decided it will not be awarding a TGRA 86 Series Championship winner this year.

However, for the drivers and teams, many are simply pleased to be back racing again and looking forward to a final outing before a full season of exciting racing in 2022.

For Zach Bates, Bathurst offers the chance to top off what has been an extraordinary debut in the TGRA 86 Series for the 17-year-old student.

As the son of former racer Rick Bates and cousin to Australian Rally Champion Harry Bates, the broader Bates family is steeped in Australian motorsport and Zach looks set to continue that, having won all three 86 races at Townsville and all five races in the past two rounds at Sydney Motorsport Park.

Having started in karts at age 11, Zach quickly rose through local, state and national competitions, was keen to get behind the wheel of a race car and says the TGRA 86 Series really appealed.

“One of the big attractions of 86 was the size of the fan base and the audience. The 86 Series is really cost effective and the competition is great. It’s great to have big grids and it’s really exciting for the fans,” Zach said.

And while it has been a challenging year, he’s kept himself match-fit driving a simulator and getting out for some serious mountain biking and said he is keen for the challenge of Bathurst.

“I’m really looking forward to getting back to Bathurst, there isn’t a track like it. It’s a bit intimidating and there isn’t a lot of room for error, but that just makes it all the more exciting for the fans and the drivers,” he said.

Bailey Sweeney, from Bateman’s Bay on the south coast of NSW, is another young hopeful keen to get back on the mountain.

As the perfect training ground for aspiring professional drivers, many teams in the TGRA 86 Series are run as a family affair and with Dad taking mechanic duties and Mum as team manager, Bailey’s outfit epitomises the community ethos that is at the heart of the series.

“Dad’s always been a fan of motorsport and Mum wasn’t so much, but she’s come to like it as the years go on and it’s great to have them there and be part of the racing,” Bailey said.

Like many, Bailey started in karts with three years in the national series before graduating to the TGRA 86 Series for a single race at Bathurst in 2020.

“The 86 series was a natural progression and I’m a big fan of the car. It’s been a good car for me to adapt in from karts and get used to the driving style of the car,” Bailey said.

“The series offers affordability, really close wheel-to-wheel racing and is definitely great for learning and refining your driving, especially on circuits like Bathurst.

“I had car dramas at the first round at Bathurst this year and didn’t finish a lap so really looking forward to it this time and giving it a proper crack.

“Across the top is a challenge with all the walls because you make a little mistake and it can have big consequences, but our pace is pretty good so it’s just a case of keeping it together when it matters and working forward in the race,” he said.

While the TGRA 86 Series offers a superb training ground, it is a series that is open to allcomers, many who race simply for the passion.

Newcastle-based Marcus LaDelle is one of those who, after a 15-year hiatus from motorsport, returned to the track last year and had his first outing in a Toyota 86 a few weeks ago at Sydney Motorsport Park.

Marcus started racing “many moons ago” something he says he is constantly reminded of looking at the keen youngsters on the 86 grid, and from the age of 16 he saw action in Formula Ford, Formula 3, and GT before racing Supercars in the development series in 2005/06 for Dick Johnson Racing.

After 15 years, he’s now back behind the wheel of a Toyota 86 and relishes the tight competition, getting back on track at Bathurst, building up his 99 Motorsport team and pushing himself for a full season next year.

“It’s a compliment in some ways that I can still keep up with the young guns but the time away made the desire even stronger to come back and do a good job,” Marcus said.

“Everyone in motorsport knows the TGRA 86 Series is arguably the most competitive category in Australia. Being a one make series means you can’t be bought out of it – there’s a lot of areas in motorsport where you just spend more money to go faster and you can’t do that in this category and I really appreciate that.

“One of the greatest things about the category is that the whole field is spread by less than a second or two in qualifying and you make a mistake and you’re quickly back four or five spots. Not only is that appealing for me, but it’s a great breeding ground for racing in general, and its rarely seen in motorsport today,” he said.

Looking ahead to the weekend at Bathurst, Marcus said he can’t wait to get back out there.

“I’ve come back not to forge a career, but to truly test myself and go and enjoy it, and there’s nothing like being penalised for your mistakes, that’s how we grow as people, as race car drivers… and what a place to test yourself.

“It really is a daunting racetrack and when you take every aspect of danger, whether that’s concrete walls, elevation, blind corners, fast straights and then you put it all together with 30 other blokes… and the weather, it is pretty astonishing,” he said.

Three TGRA 86 Series races will be run at Bathurst with all the thrilling action broadcast live on Kayo Sports at https://kayosports.com.au/