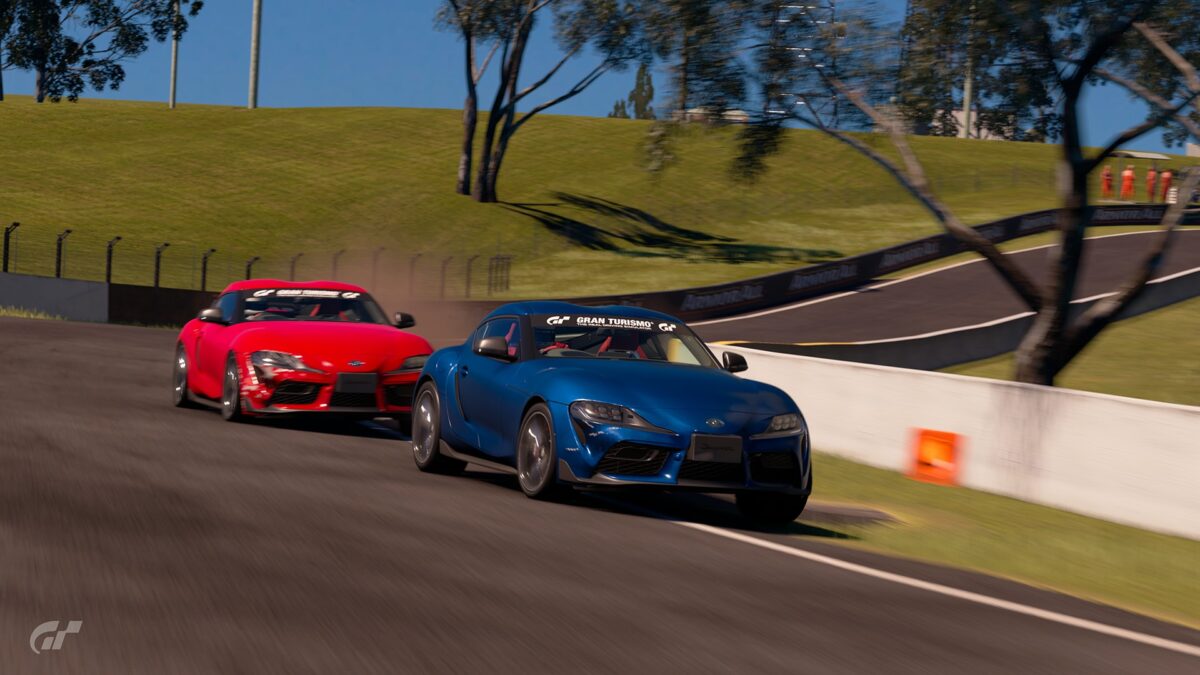 Harry and Lewis Bates in practice at Bathurst in a bid to try and top the Australian GR Supra GT Cup leaderboard launching after this weekend’s race at Le Mans.

Toyota is seeking to reward Australia’s best virtual drivers as it launches an Australian leaderboard for the one-make GR Supra GT Cup series, played through Gran Turismo Sport® on PS4®.

The GR Supra GT Cup is now in its second year drawing gamers, motoring enthusiasts and real-life race drivers from across the globe. Round 3 of the 2020 season is taking to the legendary La Sarthe circuit at Le Mans on Sunday 7 June.

Following the Le Mans race, Toyota will recognise the fastest locals in the game and on the track through the Australian-only leaderboard.

Players will be ranked on their four best races across the total seven rounds of the series, with five rounds still to be run. Drivers finishing in the top three podium positions after the final round, held at Australia’s iconic Mount Panorama circuit at Bathurst in August will win a prize pack worth up to $500.

Gamers and motorsport fans missing the excitement of the racetrack during COVID-19 will have a chance to claim bragging rights being named Australia’s GR Supra GT Cup champion. Competitors can race against local professional racing drivers such as Australian Rally Champion Harry Bates and his teammate and brother Lewis, and Luke King, the 2019 TGRA 86 Series runner up.

Leading gamers racing in the series include Cody Nikola Latkovski – aka Nik_Makozi – who won gold at the inaugural 2019 FIA Motorsport Games and was runner up in the 2019 GT Sport Nations Cup World Final; Adam Wilk, a regular on the Gran Turismo Sport World Tour; and Emily Jones – aka emree_ree – a versatile racer and member of the Trans-Tasman Racing team.

Toyota Chief Marketing Officer Wayne Gabriel said with racing at the core of the TOYOTA GAZOO Racing brand, it was great to be able to support Aussie gamers and racing communities through such an exhilarating competition as the GR Supra GT Cup.

“Racing fans can get their motorsport fix driving some of the most iconic racetracks across the globe alongside international and local professional racing drivers,” Mr Gabriel said.

“And at the same time, they will be up against some serious gamers who will be on point to show off their skills behind the wheel to try and finish the season at the top of the leaderboard.

“It all adds up to some pretty exciting online racing action,” he said.

Australian Rally Champion Harry Bates said: “I’m new to gaming but I am looking forward to trying to replicate my track skills in the virtual world against some of Australia’s best gamers.”

“Having two communities join together to battle it out for the Australian GR Supra GT Cup champion title will be no mean feat and it’ll be exciting to see who has got what it takes to top the Australian leaderboard in August.”

To take part players must be over the age of 18, have Gran Turismo Sport® on PS4®, and register to play, click here.

The top ten Australian leaderboard will be posted to the TOYOTA GAZOO Racing Australia Facebook page after each round.