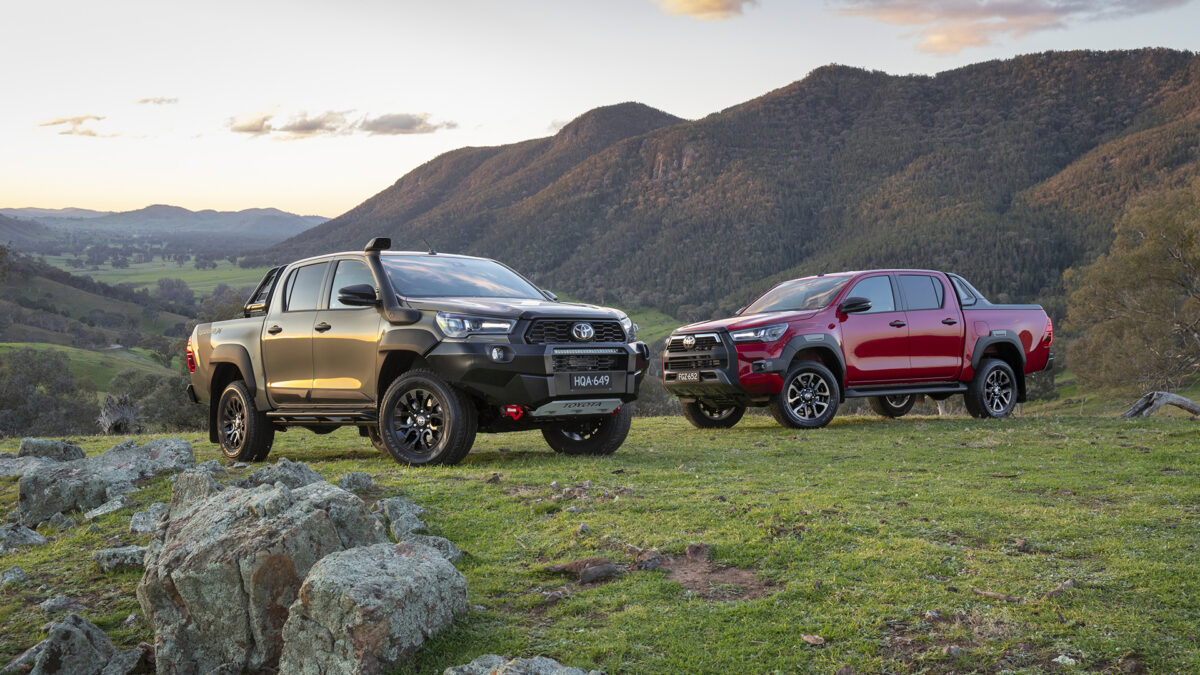 Toyota has unveiled the most aggressive, most advanced – and most Australian -hero versions of the nation’s best-selling vehicle, HiLux.

In this latest update, the new HiLux Rogue and HiLux Rugged X have been endowed with substantially higher performance and innovative new features.

These have expanded the sense of adventure for HiLux Rogue and elevated the off-road protection and functionality of HiLux Rugged X.

The two hero HiLux variants are expected to arrive in dealerships during the second half of November with final timing to be determined by the level of restrictions in Melbourne where the vehicles undergo final assembly.

Toyota Australia’s significant role in developing and evaluating the 2.8-litre four-cylinder turbo-diesel engine, rear suspension and hydraulic power steering was supported by teams from Japan and Thailand, as well as representatives from other markets.

Maximum braked towing capacity has been uprated by 300kg to 3,500kg1, supported by the higher-output engine and a recalibrated six-speed electronically controlled automatic transmission.

Drivability has also been improved with revisions to the rear suspension that improve unladen ride comfort while a new variable flow-control power-steering pump offers greater assistance for low-speed manoeuvres such as parking.

Toyota’s local design team played a significant role in the restyling of the HiLux halo variants, supported by colleagues in Japan and Thailand. Inspired by Toyota’s global truck design DNA, they dialled up an extra layer of aggressiveness for the premium, sporty exteriors.

These specialised components – including features such as the rock rails and hoopless bull bar on Rugged X – are fully integrated and engineered into the core vehicles and covered by the standard factory warranty.

Toyota Australia’s Vice President Sales and Marketing Sean Hanley said the passion and commitment of the company’s local teams have delivered vehicles that are purpose-built for Australian customers.

“The expertise of our local teams has ensured these two fully fledged models offer more power and torque, more relaxed towing and overtaking in all conditions, sharper steering and handling, and suspension refinements that deliver excellent ride quality in all conditions,” Mr Hanley said.

“They also incorporate an in-demand array of locally designed, developed and tested components that enhance capability and style: premium features on the ‘work and play’ HiLux Rogue and serious off-road protection and recovery for Rugged X.”

The turbo-diesel engine’s increased output was achieved through the adoption of a larger water-cooled ball-bearing turbocharger, supported by additional measures to achieve Toyota’s mandated performance, cooling and durability standards.

The six-speed automatic transmission was recalibrated to allow earlier lock-up for improved acceleration feel and to ensure adherence to Toyota’s strict temperature tolerances, especially when towing.

Leaf springs and shock absorbers were re-tuned to improve unladen ride comfort without compromising the vehicles’ ability to carry loads over uneven terrain.

Toyota’s design studio in Melbourne contributed to ensuring HiLux Rogue was redesigned as a global vehicle to be tailored and sold in markets around the world.

The brief was to achieve a combination of additional toughness, complemented by a more recreational focus for a vehicle designed to go anywhere.

Rogue is distinguished with a vertical grille that is dark and bold, flowing from the bonnet down to the prominent lower bumper and under-guard.

To achieve a more unified look, the LED headlamps – now with dark internals – combine with the bold outer corners of the bumper, which links to the strong fog lamp surrounds.

Toyota’s local conversions and accessories team was determined to set a new standard for performance with the introduction of an innovative motorised roller cover.

An integrated cargo-protection system, it is equipped with remote power-operated opening and closing linked to the central-locking system. It is also equipped with an anti-jam function, integrated lighting, anti-theft design and high levels of weatherproofing and dust protection.

After extensive benchmarking and tear-down of similar products, locally developed prototypes were subjected to testing including rough-road durability – ensuring the same durability as the rest of the vehicle.

Testing included Toyota’s rough-road circuit in Japan – the same location that confirms the strength and durability of vehicles like LandCruiser.

Extensive field tests in Australia confirmed weather protection and the ability to keep out dust – a non-negotiable requirement for the large number of customers who use their vehicles on dirt tracks or take them off-road.

Designed in tandem with the motorised roller cover, the new sports bar is made from resin, which is easier to form than steel. This also allows the new bar to have a more intricate and stylish “sailplane” shape.

Rogue also features dark new designs for its 18-inch wheels, rear bumper and tailgate, along with the security of two front and four rear parking sensors. Improvements to the marine-grade carpet tub liner improve its appearance and coverage area.

With the design makeover completed by a chrome Toyota tailgate badge and new decals on the tailgate and sports bar, the style-leading HiLux Rogue is priced from $68,9902.

A wider, stronger-looking grille for Rugged X features a defined surround and bold 3D mesh that integrates with a new bonnet and dark headlamps that sit above body-colour infill panels to give them an even more distinct appearance.

The steel bumper design was preserved, but details like the driving light bezels have been re-designed to integrate with the new grille theme and lower bash plate that now proudly displays the Toyota brand in black.

Other Rugged X styling enhancements include bolder, more pronounced over-fenders combine with newly designed, chiselled jet-black 17-inch wheels, along with signature decals on the bonnet and rear quarter panel – all of which give the vehicle an even more purposeful look.

The new grille and related components were fully engineered and designed in-house in Australia, including extensive local testing to ensure cooling performance.

Computer-aided design confirmed airflow through to the radiator while the ability to absorb stone impacts and vibrations on rough roads was confirmed by real-world and laboratory testing.

The durability of the Rugged X grille and surrounds was confirmed through millions of cycles of shaking at its “resonance frequency” in the local company’s vibration chamber. The stress testing also included temperatures from minus-30 degrees to 80 degrees.

An important factor in the grille redesign was the need to reposition the Toyota emblem and Toyota Safety Sense millimetre-wave radar positioned behind it, as well as minor adjustments to the hoopless bull bar and other components.

Local testing confirmed that the calibration for this vital safety sensor – which works in tandem with a monocular camera mounted at the top of the windscreen – meets the global standards set by Toyota.

Rugged X is also with other locally designed and engineered features for enhanced protection, functionality and recovery capability for serious off-roading.

Fully equipped for off-road adventures straight out the showroom, the Rugged X is priced from $69,9902.

Standard features for HiLux Rogue and HiLux Rugged X now include courtesy illumination for the exterior mirrors in addition to the standard towbar, tow ball, tongue and fully installed seven-pin flat trailer wiring harness that has proven popular with owners wanting to tow a boat, off-road trailer or caravan.

There are nine exterior paint colours, three of which are new: Feverish Red, Satin Blue and Oxide Bronze.

Inside, the two vehicles exude comfort and convenience with a larger 8-inch display screen with control knobs, an upgraded multimedia system with Apple® CarPlay3 and Android™ Auto3, and a premium JBL4 9-speaker sound system. One USB point and two AC 220-Volt accessory sockets are standard.

Restyled instruments adopt blue pointers while the 4.2-inch multi-information display now incorporates a digital speed readout and a pictogram showing the angle of the front wheels.

Satellite navigation is easier to use with enhanced voice recognition while other additions include an electro-chromatic rear-view mirror, new ornamentation and blue illumination complete the updated look.

Front and rear mats are included – carpet for Rogue and all-weather for Rugged X.

Like all Toyota vehicles, HiLux Rogue and HiLux Rugged X are covered by Toyota Service Advantage with each of the first six scheduled services costing just $2505.

HiLux Rogue and HiLux Rugged X are equipped with Toyota Safety Sense, including a pre-collision system6 with autonomous emergency braking and the ability to detect pedestrians around the clock and cyclists during the day.

Like every HiLux, the two new halo models are equipped with seven airbags and a reversing camera.

1 Towing capacity is subject to regulatory requirements, towbar and vehicle design and towing equipment limitations.
2 Manufacturer’s recommended retail price provided for media purposes only. Statutory charges or other on-road costs not included.
3 Requires compatible device, USB connection, mobile data, network reception & GPS signal. Mobile usage at user’s cost. Apps subject to change. For details see [toyota.com.au/connected/]. CarPlay® is a trademark of Apple, Inc. registered in the U.S. and other countries. Android Auto™ is a trademark of Google LLC.
4 Product & company names are trademarks of their respective owners.
5 Maximum price quoted is model specific. Applies to standard scheduled logbook servicing (normal operating conditions) for 3 years/60,000km (whichever occurs first) up to a maximum of 6 services. Excludes Government & Rental vehicles. For details see your Toyota dealer or visit toyota.com.au/advantage.
6 Driver assist feature. Only operates under certain conditions. Check your Owner’s Manual for explanation of limitations. Please drive safely.
7 Use of recovery points has safety risks which must be assessed and managed before every recovery operation. Incorrect use of the recovery points may result in death, serious injury or vehicle damage. Always following warnings and instructions provided on the vehicle and in the Owner’s Manual.